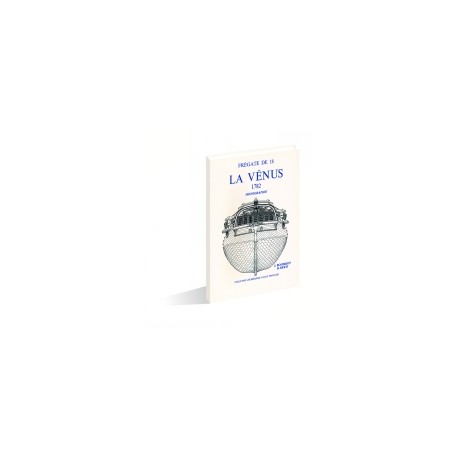 The frigate La Vénus, referred to as an 18-pdr because of the caliber of her main artillery, was conceived and designed by the engineer Sané and built in Brest in 1782. It is one of the prototypes of the 143 similar frigates which were to be built in every port of France and continental Europe from 1780 to the end of the French Empire.
Often imitated by the British, Sané's 18-pdr frigates enjoyed remarkable success during their lengthy career. The last ones, built at the end of the Empire (1813) were not dropped from the lists until about 1850.
The French archives abound in accounts of the valorous actions led by Sané's frigates. Other episodes, like the story of the Médusé whose wreck was found on the banks of the Arguin are less commandable.
The documentation we offer here brings the Vénus to life. Further research, which was facilitated by documents in French and British archives, as well as archives in the many other countries occupied by the French Empire, enables the construction of the Vénus and other frigates of the same type with a particular decoration or distinguished military career. The Vénus herself had a non-combative and humanitarian career. Her captain, de Rossily, the former commander of the lugger LE COUREUR at the time of the famous battle of LA BELLE POULE, sailed her on a voyage of discovery in the Red Sea, the Persian Gulf, and the Indian Ocean before her complete disappearance during a hurricane with all crew and cargo, on 31 December 1788 after having set sail from Saint Paul de la Réunion.

75 p. booklet, 24x31cm format, including :
1. The history of frigates in the French navy
2. Analysis of the results of research which enabled the writing of the monograph
3. Commentary and analysis of 13 photographs of ship's models in the Musée de la Marine in Paris, two paintings by François Roux and two plates from the Atlas du génie maritime (The Atlas of Naval Genius)
4. History of the campaign of the Vénus in the Indian Ocean from 1785 to 1788
5. Detailed commentary with all necessary information on the 13 plates at 1:72 scale, with several drawings of details of fitting at 1:36 scale
6. Complete vocabulary of fitting and rigging.

1. Shape of the hull, longitudinal plans
2. Shape of the hull, cross-cut plans, front and rear views of the frigate, cross-sections
3. Planking of the hull
4. Construction of the head,and the quatergaleries in the stern.
5. Plan of the ship's battery and a partial longitudinal section.
6. Plan of the forecastle and partial longitudinal section.
7. Fitting and details
8. Elements of the masting
9. Elements of rigging for masts and various pieces of fitting
10. Longitudinal sails and standing rigging
11. Installing the square sails of the foremast and mainmast, issue of rigging on the outside of the hull
12. Installing the square sails of the mizzenmast, issue of rigging on the deck.