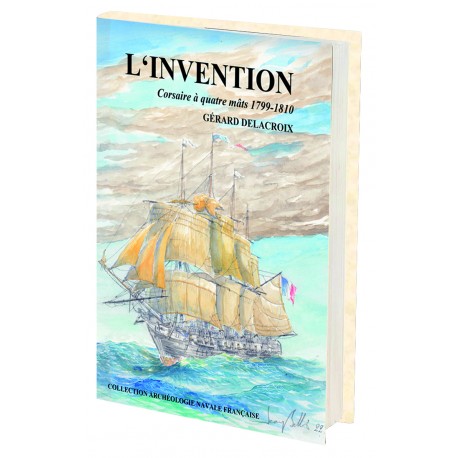 All the drawings necessary to make a fully-framed model

Privateers, contrary to pirates, were entirely legal. They generally used old merchant vessels, but some of the ships used were built specially to chase and capture.

During this period, and under pressure from English cruisers which were strangling French maritime commerce, entrepreneurs constructed and armed numerous privateer ships specially built for this purpose.

Simple in concept, these ships were rapid and highly manoeuvrable for their effectiveness, even though they were economically built. The only end of the owners being their profitability, the construction of the privateers was lightly executed at minimum cost.

The formula proved to be effective as English commerce and that of its allies was sorely tried by the war of intense competition at that time.

L’Invention, made in Bordeaux in 1799/1800, is one of these ships — but innovatively designed for the period, having a hull with narrow lines and unique four masted rigging. It was a precursor well in advance of the clippers which were to come some decades later.

Despite a short career as a privateer, it had the advantage of being built for the chase while adopting exceptional technical solutions.

The monograph comprises all the drawings necessary for a framed model as all the parts are illustrated and commented on. A range of technical notes and the detailed description of the rigging for a four-master complete the set of plans.

A monograph in a cloth slipcase and a cover painting by Jean Bellis, including an explanatory booklet of 130 pages with a set of 34 plans to a scale of 1:48 detailing its construction and rigging.

- Privateering ships - Some plans of the Bordeaux privateers

Reconstitution of L’Invention :
- Masting
- The question of oars
- The deck
- The hull

History of L’Invention
Monograph 1:48
- Commentary on the plans
- Details of metal parts
- Painting
- Note on the guns
- Timber dimensions
- Description of the rigging
- Masts
- Yards
- Sails

The plans in the monograph are at a scale of 1:48:

4 – Parts of the axial framework

10 – Sheer view of the framework

13 – Construction of the head and beakhead

14 – Longitudinal cross-section of the framework

19 – View from above the fitted deck

25 – Overall side view of the hull

32 – Rigging for the longitudinal sails