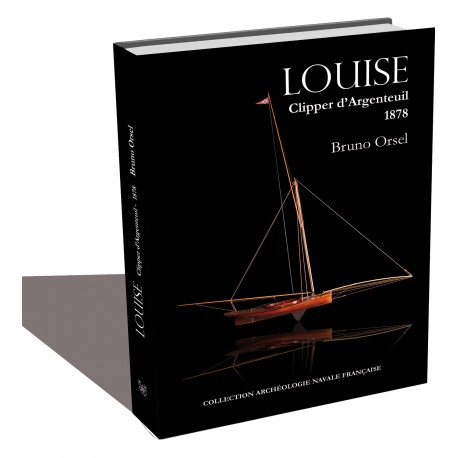 The present monograph describes a racing Argenteuil clipper at the top of the evolution of the type.

The development of row-boating and pleasure sailing at Argenteuil and more generally around Paris was closely related to the upheaval of French society in the second half of the 19th century. The first races between rowboats and then sailboats began in 1850. But river pleasure boating still involved a hodge-podge of diverse contrivances. A sort of aristocracy developed itself slowly until, starting from the simple small boat with a sail, the ambition of the early racing-boat owners progressed until they actually designed and built true sailboats which, in the case of the most dedicated and also the most well-to-do, were real racing machines, pure-breads of the pleasure sailing that was then in full evolution.
The clippers of the Seine river were born within this context and Argenteuil and its exceptional body of water became the highlight of Parisian sail races.

But prior to this, the importation from the US of some specimen that sail the New-York bay such as “Margot”, a sand-bagger and later “New-York”, a cat-boat caused some upheaval and re-thinking in the principles of construction of river boats. These American center-boarders were studied by designers with the objective of adapting them to the sailing conditions on the Seine river. From that point emerged bolder designs with finer lines, taller rigs and more extreme boats that took the name of “clippers d'Argenteuil”.

The present monograph describes a racing Argenteuil clipper at the top of the evolution of the type. The study of this boat is based upon a very valuable historical documentation. Bruno Orsel studied the documentary and technical sources of the time that were widely expended in the magazine “Le Yacht of 1878 and the following years” and in the celebrated treatise on naval construction of Dixon Kemp, “a Manual of Yacht and Boar Sailing” were the author offers a very precise description of the rigging of the Seine river clippers. The Musee National de la Marine owns several models of clippers from these days. Their study provided a wealth of information, especially on their mode of construction and the precious details about their rigging.
This monograph will enable you to build a fine and elegant model; a perfect marriage between technique and poetry.

A 52-page color booklet in 21 x 30 cm format with 70 drawings and photos, with the CONSTRUCTION of the model.

A set of ten plates at the 1/15 scale including: