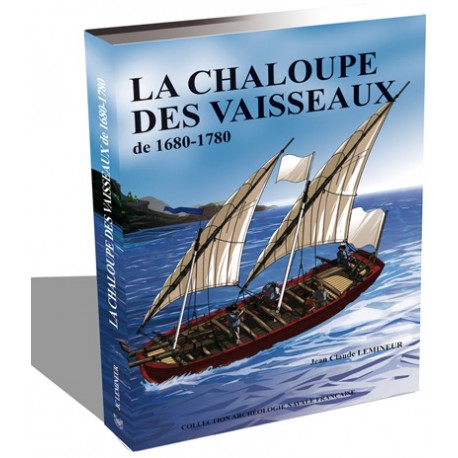 The boat's construction and the details of the framing are described in the book, as well as the 4 different types of rigging:  the square rig, the lug rig, spritsail rig, and lateen rig.The book consists of 15  plates 1/24 which all plans charpente.Booklet 112 pages,  including 16 color pages- photos with the realization of the model.

In monographs, ships boats are generally considered as simple elements of a ship's furniture and are not the object of any special attention.

In his book about the 74-gun ship of 1780, Jean Boudriot included a description of the longboat, but did not go into great detail because it was not the central subject of his book.

The longboat was really the all-around servant in a vessel : carrying supplies, moving anchors, carrying water when in campaign, carrying landing parties in coastal raids, transporting officers and VIP's, towing when becalmed, and many other tasks.

The longboat may be adapted to all these missions but no drawing has shown it in these various situations until now.

ANCRE publishers wished to fill this need by offering to interested fans a study which, without being exhaustive, covered all aspects of the subject. The study proposed by J-C. Lemineur is centered on a 36-foot longboat. This length is that of a master longboat arming first-rate vessels in the 17th century, such as L'AMBITIEUX of 1680, but also 18th century 74-gun ships whose dimensions had increased over the years.

A lack of evolution resulted in its preserving its structural characteristics over a period from 1680 to about 1780.

The boat's construction and the details of the framing are described in the book, as well as the four different types of rigging used in the French Royal Navy : the square rig, the lug rig, spritsail rig, and lateen rig.

It is shown both under sail and under oars, or as a ceremonial boat. It may be configured at will according to anybody's taste and may lead to many different personnalized models.

The present monograph provides descriptions about anchor handling by longboats, in particular anchoring and moving second bower anchors, and finally their loading aboard ship and their launching.

The text is complemented by six 3-dimentional illustrations showing these maneuvers, something that will help modelers design dioramas.

ORGANIZATION OF THE BOOK

The role and physical aspect of longboats

The role and physical aspect of small boats

Number of thwarts according to length

Boat allotment on ships of the French Royal Navy

Types of rig on ships' boats

Boat length according to ships rates

Number of thwarts, masts and rowing style according to length

Boat allotment on ships of the French Royal Navy

Dimensions of masts and yards according to rig type

III Handling of the anchors and of the longboat

loading the hawser and the second bower anchor prior to anchoring

The longboat is hauled to the second bower anchor site

The longboat returns with the kedge anchor

Hoisting and launching the longboat

Rigging to support the yards

Pl. 4 Perspective view detailing the assembly of the stem and stern to the         keel

Pl. 6 Profile of after frames

Pl. 12 Perspective view of the longboat under oars and with its canopy