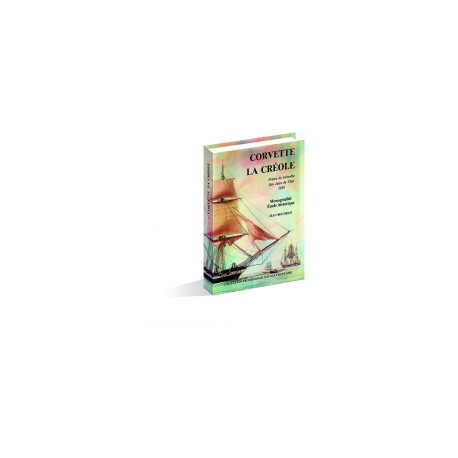 The corvette takes its place in our navy only beginning in 1696 when it is referred to as a "corvette or long bark." It appears in annual inventories until 1746 when the term "long bark" falls off and only the name "corvette"is retained. We felt it was important to choose a distinctive example of this type of ship in our navy during the Restoration. Hence the choice of the Créole, whose celebrity is heightened by the role she played in San Juan de Ulloa, Mexico, in 1838, under the command of the young prince de Joinville.
The first part of the work is devoted to the history of the corvette in our navy over a period of nearly two centuries. An original text and numerous documents of the period are guaranteed to please enthusiasts of French naval history.
The second part is especially intended for ship's model builders. Fifteen plates describe the Créole in full detail and several photographs of the original model, now preserved in the collections of the Musée de la Marine in Paris, enrich the monograph. *
The study of the rigging is developed in depth. In short, this is a monograph of exemplary quality. The 1:48 scale we have chosen will allow practiced model builders to construct a first-rate piece.

One volume, 24 x 31cm format, full cloth binding, 176 pages, with 14 plates (each with 3 and 4 fold-out sections), in the form of an appendix.
A second set of plates with a fifth plate showing the Créole with sails unfurled is presented in a laminated dust jacket,
with a tinted watercolor by F. Roux, which is identical to the jacket of the bound volume.

1) Definition of shell I
2) Definition of shell II
3) Edge of the hull
4) Copper lining of the hull
5) Deck planking and lining
6) Bow and stern realization
7) Elevation of the fitted hull
8) Longitudinal and transverse cuts
9) Front and rear views
10) Bridge assembly
11) Mast elements I
12) Rigging elements II, Hunes, Bars
13) Boat and anchors
14) Artillery and fittings
15) The Creole under veil on a scale of 1 / 84th.