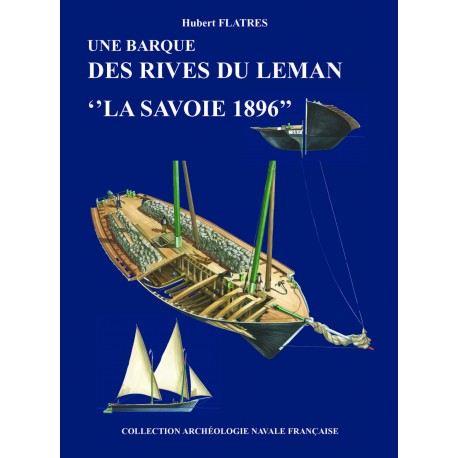 This monograph is a representation of the 1896 barque Savoie built at the Belotte shipyard in Geneva (CH).

Available in ENGLISH on september 2021.

The barques of lake Léman, atypical vessels of the XIXth century, marked the activity ion the lake for more tan a century. They participated actively in the construction of ports and buildings and in the transportation of goods around the Léman. At that time, it was a freight carrier.

The very unusual shape of this vessel is in fact, the body of a galiote with “apoustis” (platforms serving as gangways and overhanging the sides of the boat). We find many elements of the structure that were borrowed from the galleys and introduced on lake Léman by the Genoese in the XIIIth century. In spite of a vocabulary that is unique to these boats and is used by shipwrights and watermen, many words similar to those used on Mediterranean boats can be found.

On a request from the Duc de Savoie in 1671 Laurent Dental, a shipwright, invented the barque of the Léman.

The present monograph shows the barque Savoie that was built at the Belotte shipyard in Geneva (CH) in 1896.

The plans were drafted after a research for documents and pieces of information around the Léman, information from Pierre-André Reymond, a naval architect who built two barques : La Savoie and La Demoiselle with the assistance of André Lesnay, a member of the “Association des Amis du Musée National de la Marine”.
It will allow you to build an unusual model that exists nowhere else but on the Léman.

It is an elegant vessel in its shape, and simple to make for beginners because of the small number of elements of furniture.

The art of navigation under lateen sails is listed in the 2020 intangible heritage in France. Requests for listing are also in process in various European countries such as Spain, Italy, Croatia and lately Switzerland which regroups the lateen sails of Franco-Swiss Alpine lakes.

Make-up of the monograph

A brochure in full color that includes :

I. The history of the barques of the Léman by Michel Pittaco, past president of the “Mémoire du Léman”.

II. The construction of the barque Savoie by Pierre-André Reymond, naval achitect for the barques Savoie and Demoiselle.

III. Search for the plans of La Savoie 1896 and examination of the models at the Musée du Chablais at Thonon-les-Bains.

V. Detailed commentaries providing useful explanations about the plates and nomenclature for the furniture and the rigging.

Information: Supplementary plans can only be sold if you already have the complete monograph.