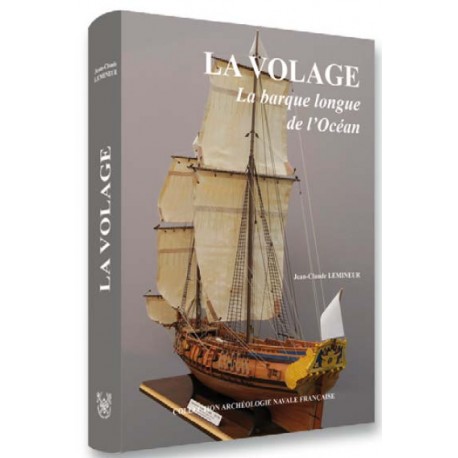 16-page color brochure containing details of rigged and timbered models, 31 plates at the 1/24 or 1/36 scale necessary to build the structure.

This new monograph is concerned with the study of a long bark, the Volage, built in Dunkirk in 1693, in the middle of the War of the Great Alliance by René Levasseur, the first master shipwright who succeded Hendrick who died in 1689.

The Volage was a warship of Louis XIV French Royal Navy. Armed with ten 4-pdrs, with a burthen of 50 tons and a 50-man crew, she was one the biggest of her class with a length of 63 ½ feet.

In the Navy records of 1696 to 1702, reported as being good, and even sharp under sail. Realy built for privateering, she possessed nautical properties that allowed her to overtake her preys, and therefore, to be highly apprciated by Dunkirk privateers.

It was aboard a similar bark that Jean Bart began his talented career as a privateer captain in 1674 during the conflict with the United Provinces of the Low Countries.

The Volage participated in the guerilla warfare initiated by Vauban and from 1693, by the Royal Navy itself against English trading fleets, within the framework of the War of the Great Alliance. Her activities probably continued during the War of Spanish Succession. Ordinarily, she insured the safety of the French coasts, protecting merchant vessels from piratical raiding. Her missions extended to the protection of fishing fleets on the Newfoundland Grand Banks. She was striken from the Navy list in 1706, hauled ashore and rebuilt at Dieppe, probably for a private ship owner.

The Volage, a regular ship of war has nothing in common with the Belle, built at Rochefort in 1684 by Pierre Masson, which was an ordinary bark rigged as a corvette.

The reconstruction of the Volage was carried out using two specifications to be found in a manuscript preserved at the Paris Navy Museum, one of them contains the dimensions and the other one the rigging. They were used to describe her architecture and the characteristics of her construction. To these documents, is added information obtained from a memoir by Hendricks about his method for drafting ships lines.

Military long barks are a subject that was long overlooked. The reader will find in this document, treated in exhaustive detail, all the details susceptible of informing him about the ship. It will provide ship modelers with the opportunity to build a particularly realistic model.

PRESENTATION OF THE BOOK

The book is presented in a blue fabric-covered 24x31 cm box containing a 104-page brochure that includes the sources, history and plates in a reduced scale, along with commentaries and a 16-page color brochure containing details of rigged and timbered models, as well as the 31 plates at the 1/26th scale necessary to build the structure.

Contents of the brochure

Chapter 4 Study of the rigging. Notes on the masts, sails and blocks

Chapter 5 Commentaries on the 31 reduced plates

Chapter 6 Routing of the rigging lines