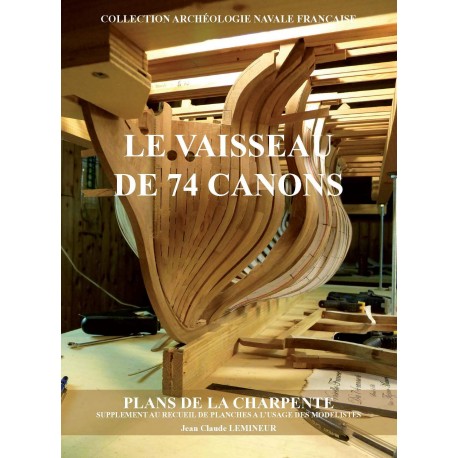 The 11 timbering plans (1/72 or 1/48)  with a color 24-page booklet with a series of photographs illustrating the implementation of the framework.

The essential complement to your 4 volumes.

In 1973, Jean-Boudriot published the first volume of a work dedicated to the 74-gun vessel, completed in the following years by three more volumes, the complete set providing, for the first time, an exhaustive and detailed description of all the elements making up a warship during the pre-revolutionary days.

The publication of this work resulted in the construction of reduced-scale models, an endeavour that was made difficult because of the lack of plans specifically dedicated to the timber structure, and in particular those showing the hull frames profile.

In order to respond to this demand, ANCRE Publications felt they had to fill this void

The drafting of the plans was entrusted to Jean-Claude Lemineur who is well known for his study of the French naval architecture and construction under LOUIS XIV.

His interest in this subject dates back to the 1970's when he met with Jean Boudriot. The latter encouraged him to dedicate himself to his work and gave him his support.

The lessons he learned from the 74-gun ship were put into practice in 1983, when the monograph of BOULLONGNE was published. It was the first that showed all the plans necessary to build a model's timber structure. Its construction by the modelist from the Belgian city of Liege, Arthur Molle was complex. Jean-Claude Lemineur contributed to this effort by providing his technical knowledge. He himself became the author of two monographs : a fifth rate of 1683 and a light frigate of 1697

It is therefore quite naturally for his real competence, that he was entrusted with the drafting of the timbering plans of Boudriot's 74-gun ship.

It required no less than eleven 31x91 cm plates for its representation, that includes the complete and detailed draft of all timbers making up the stem and the stern as well as the profile of all the hull's frames. The set of these plates is accompanied by a 24-page booklet that briefly recalls the story of the evolution of the 74-gun ship from its origins in 1664 to its mandated adoption in 1782 based on Sané's plans, and ends with a set of nine photographs illustrating the construction of the timber structure.

Wishing to maintain the universal nature of his ship, Boudriot did not personalize it by giving it the name of a contemporaneous vessel.

Some modelers have regretted this decision, the personalization of their model providing an additional historical dimension and getting away from a certain banal nature. They will find in this brochure some information on the possibilities, in reality rather rare, of making their model represent a 74 that made itself famous during these war years. Two possibilities of substitution of decoration are offered: the 1782 CENTAURE and the 1785 SUPERBE.

The rest is dedicated to the timber structure with commentaries about the plates.

The plans concerning the timber structure are delivered within a cardboard cover containing eleven plans at the 1/72 scale.

2.      Plan view of the waterlines and construction ribbands

3.      Cross-section of the hull. Drafts of the rider frames

11.  proposal for substituting the decoration of CENTAURE and SUPERBE.

The timbering plans are sold separately from the set of plans from the book and provided within another cardboard cover to the same format. These may be provided at the 1/48 scale upon request.