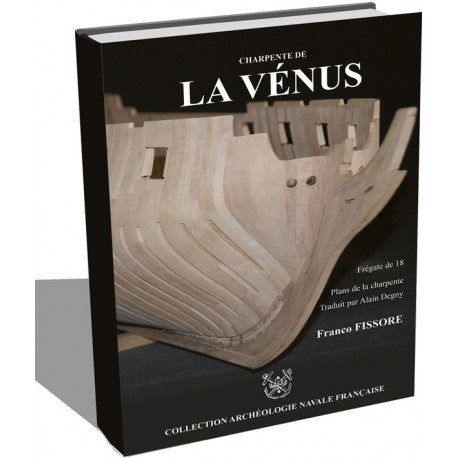 A 32 page booklet in full color, including 14 pages on the realization of the framework with 50 color photos.

A cardboard box encloses the booklet and the 16 plates.

The monograph of La Venus is part of a series dedicated to the types of vessel most representative of our navy in the classical
era. Thus, frigates have already been the subject of monographs such as La Belle Poule. La Venus is characterized by the artillery of her battery, armed with 18-pounders, and also by her designer, the naval architect Sane around 1780.
Our objective is to complete this monograph in order to enable modelers to construct a structural model that includes the interior furnishings.
The new plates that complete La Venus have been drawn according to the descriptive order that was used in previous publications.

The monograph is made up of the following
16 plates:

At first glance, this monograph is directed to experienced modelers. With a proven skill, they will be able to construct a model with a rare quality, because of the innate elegance of this frigate, and I may add her beauty , the fine runs of her hull as well as her decoration which is a tribute to French naval architecture.