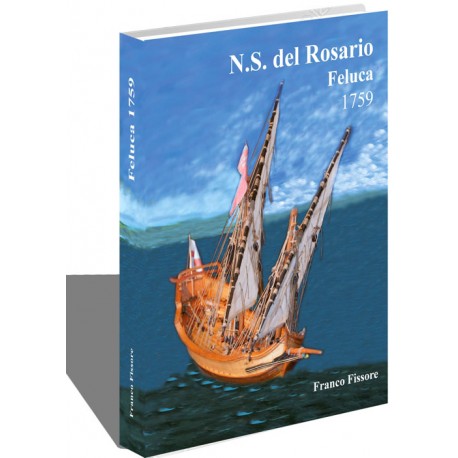 A 200-page booklet, 130 of which concern the construction of the model

20 plates necessary for the construction of the timber frame

Notify me when available
Author : Franco Fissore Translated by FrancoisFougerat

Booklet of 130 color pages on the construction of the felucca:

Construction of the felucca

Captain and owner Pietro Garibaldi’s felucca Nostra Signora del Rosario (Our Lady of the Rosary) which is presented in this monograph is an example of a typical sardine-ﬁshing vessel of Sanremo (Liguria). Built in the Porto Maurizio yards and launched in 1759. She was under the control of the Most Serene Minister of Health of the Republic of Genoa. As compared to feluccas intended for other functions, those intended for ﬁshing had a characteristic rig. The very large sail surface, difﬁcult to handle while ﬁshing, was carried on a short and stubby lateen yard, capable of imparting power and resistance to the vessel by preventing it from capsizing in a hard blow. In some cases, lateen yards could have a

diameter approaching that of the mast under the top, as was the case with a pianella (a variant of the felucca) of 1766 that we discuss in the text.
An exceptional documentation comprised of 292 photos and 99 drawings supplements the plates and allows the reader to follow the complete construction of the felucca step-by-step. Experienced modelers, as well as those more recently interested in the subject, will ﬁnd in the text, complete information including the making of special tools facilitating the construction of the model.