> Our books>Monograph>AIGLE The Imperial yacht -1857 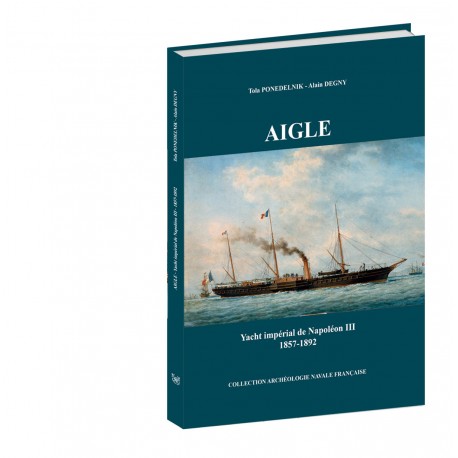 Intended to be a showcase of the nation and to contribute to the prestige of the Empire that it represents on the oceans beyond our frontiers, the Aigle, a magnificent yacht with elegant lines, inspired from queen Victoria’s, was the child of the great naval architect Dupuy de Lôme. With a 500 hp engine driving paddle wheels, it could reach a speed of 14 knots, making it one of the speediest of the avisos fleet of the French Navy. Its luxurious Accommodations were provided by Alexandre Fourdinois, the favorite cabinet-maker of the Emperor and Empress. The height of his career, the Aigle, with the Empress Eugénie aboard, was the first vessel to sail through the Suez canal at its inauguration.

For several years now, modelers have been expressing the wish of finding documentation on mixed propulsion in the XIXth century. With this monograph, ANCRE Editions bring a first answer to their expectations.
The fruit of his research carried out in the 1990’s, in particular at the Service Historique de la Défense, Chatellerault, the model shown is the work of Tola Ponedelnik (1934-2016). It earned the gold medal at the World Naval Modeling Championships in 2006. The Musée National de la Marine also preserves a contemporary model of this ship in its 1859 version. Its study contributed to bringing complementary information about its furniture and its rigging. The Aigle is now permanently on display in the Imperial Palace of Compiègne.

This monograph will enable you to build a magnificent model of rare elegance, a perfect marriage of French technique and refinement of the time. So that it can remain within reasonable dimensions, the plans are drawn at the 1/100th scale. The model will be constructed according to the traditional manner, plank on frames with closed hull.
The work also includes a detailed plan and the complete description of the steam launch in service in 1869 and its engine.

A 108 pages booklet in color in the 23x31 cm format with 175 drawings and photographs with details of the model.

-- Prestige and ceremonial yachts
-- The steam engine and propulsion.