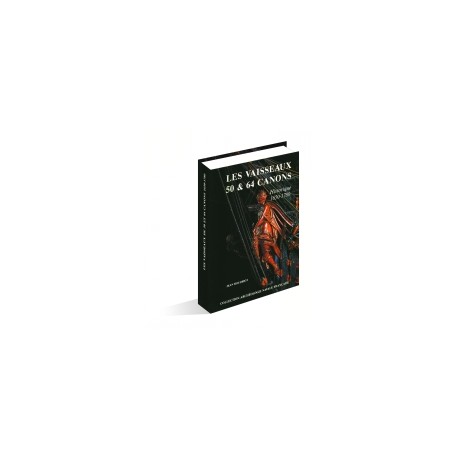 After completing the history of the frigate, the next logical step was to begin a study of ships of line in two important volumes. The first, presented here, is dedicated to 50- and 64-gun ships while the second will be devoted to 74- and 120-gun hips.
As we indicate in the table of contents, the first chapter is of a general nature. Written in the style of an essay, it discusses the origin and various aspects of royal vessels. The second chapter, which presents their evolution during the 17th and 18th centuries, required the reproduction of nearly all existing plans for these ships. Many of these documents are in mediocre condition; nevertheless, their inclusion was necessary to our study. The technical nature of this chapter is complemented by the selection of several illustrations by N. Ozanne. Numerous facts on artillery and ship's accommodations, data on costs and ships' weight etc. have been included along with lists of vessels.
The third chapter gave us the opportunity to publish an extraordinary mid-18th century manuscript, Bigot de Morogues's Treatise on Shipbuilding. Its subject is a 64-gun ship, admirably described in the text and illustrated in a set of plates of incomparable quality for the period. The ensemble of text and plates represent a true historical monograph of the period at 1:48 scale.
The final chapter introduces five different models of 64-gun ships in great detail and two large scale models of great archeological interest, preserved in Italian museums in Parma and Bologna. More than 80 photographs with comments by Jean Boudriot allow the reader to appreciate these remarkable models.
This is an extremely rich volume of heretofore unpublished material.

DESCRIPTION OF THE WORK

Volume One: 24 x 31cm format, full blue-grey cloth binding, sewn sections with headband, laminated inside dust jacket, with a four-color illustration of the prow of the 64-gun ship L'Artésien on the cover. 350 pages, 227 different drawings, photographs and illustrations, 32 lists of name boards and graphics, 115 gr paper, with two 4-color inset plates. The first is a copy of the jacket illustration, the second represents the complete model of L'Artésien.

Volume Two: Excerpts from Bigot de Morogues' manuscript, ten large plates (1:48 scale) offering a precise description of the 60-gun ship from 1740 to 1750. Multiple fold-out plates in 90 gr paper, in a laminated 4-color folder similar to the inside dust jacket of volume One.

CHAPTER I
Essay on the origin of the royal fleet: 17th-c. research toward a theory of construction of these ships.
The regulations of 1670-71-73
Counsel on construction
Inspection of shipbuilding
Schools
Individuals and theoreticians
Publications
Models
Master-builders
Conclusion: the statute of 1689
Official texts: 1670-71-73-89